Skip to content
Quite the first day…cultural day in Jerusalem (minus our guide saying “all schools have cancelled trips to Jerusalem given events this week…”).   Landed at 8:30am and off to the races. We visited the Old City where we walked through the four quarters, touched the marble Jesus was supposedly laid on (post Cross) and the cave he was supposedly laid, all encompassed in the Church of the Holy Sepulchre. While being in the heart of all the unrest you see on CNN, you feel amazingly safe…more so than parts of many major US cities.  Crossing streets being the most risky times 🙂
Intriguing dinner with two of Israel’s top journalists who gave us their take on the region & country while we stared out the patio at the old City. The context was almost surreal as we spoke and I was literally looking out at the infamous Security Wall and the intersection of four cultures in the Old City. You could feel the energy of all this history and intersection. Pretty wild.
After dinner blew me away. We went to see the City of David's tunnels…wasn’t certain what to expect. I assumed this would be the minor part of the trip and looked forward to the Wailing Wall.  I was wrong.  We toured the excavations of the City of David that were just discovered in the past 5 years (used to be under a parking garage of all places).  Sitting underneath parked cars had sat 3,800 years worth of layered remains from 18 different civilizations stacked on top of each other (Persian, Roman, Jewish, etc).  They also found letters with seals from actual messengers mentioned in the Old Testament (Jeremiah). This is significant because it foots with the Bible, indicating that the Israeli’s did live in Palestine first (however, doubt will solve the Mideast crisis 🙂   They then took us down to tunnels from 560 bc that ran up from the City to the “Temple Mount” at the top of the Hill.  It still had pottery and ash marks from when the Romans drove the last Israelis out in 70 AD and people literally took their belongings and fled. Romans smoked the tunnels as they tried to escape.
We ended the night at the Wailing Wall. I have one of these in my office when dealing with portfolio companies!
The Former "Parking Garage"…3,800 years/18 different civilizations stacked on top of each other…! 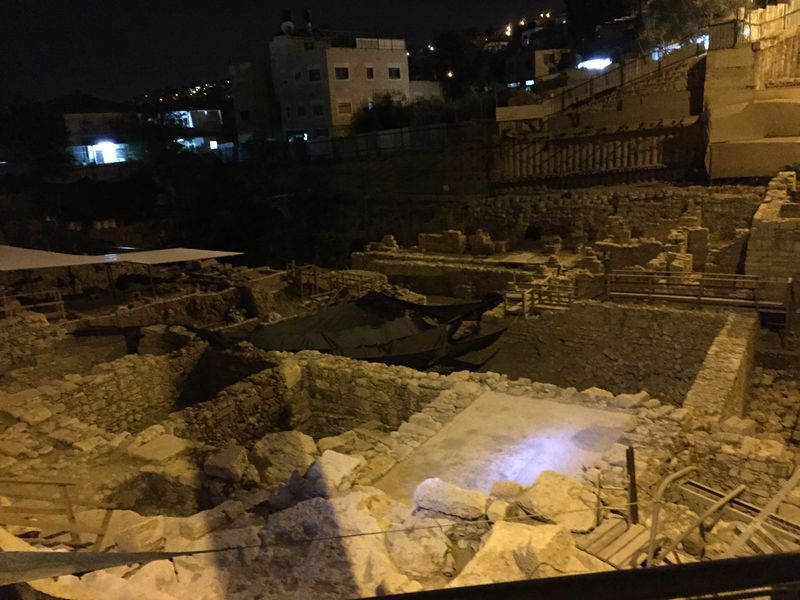